The Exhibition in the 1916 Gallery commemorates the events of Easter 1916 in this centenary year of 2016, 100 years after the Rising. The displays include the manuscript plans for the Rising written by Countess Markievicz in a Polish copybook; photographic records of the immediate aftermath – one by Irish Life, and one which was the inscribed copy belonging to Kathleen Clarke, the widow of Proclamation signatory Thomas Clarke;  the anguish of Countess Markievicz in Kilmainham Goal as she listened to the dawn executions of her comrades recorded on tiny pieces of brown paper, and carefully transcribed by Capuchin Friar Fr. Albert Bibby into a Christian Brothers’ notebook; a much folded copy of a letter written to his mother on the morning of his execution by Padraig Pearse, and published in July 1916 in a Boston magazine.

Also on display is an early replica of the original flag, which was made from wool and house paint and bore the letters “Irish Republic” in white and orange on a green background.  Theobald Wolfe Tone Fitzgerald painted the original in the home of Countess Markievicz in Rathmines, and it hung from the flagpole closest to the Prince’s Street side of the GPO, where it was shot at many times. It was captured by the British, but returned in 1966. This treasured and dusty replica has historical significance as sewn into it are buttons from the uniforms of 1916 Volunteers, and a number of bullets retrieved from the scene of the Rising.

The exhibits include a shell picked up in the street after the 1916 Rising and subsequently engraved by Adeldaad Frankie ” James Connolly,  I. T. G. W. U Murdered May 12, 1916 Kilmainham Gaol”.

Six OneConstance Markievicz‘s battle plans for a rising and poetry she wrote while in prison, have gone on display in Lissadell House #RTE1916 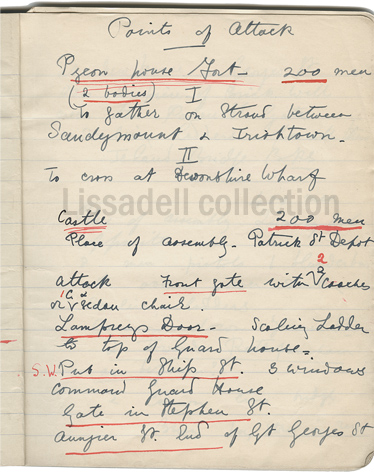 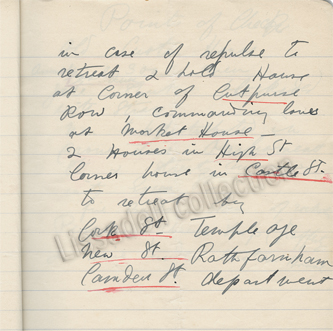 “The military plans for the Rising are the holy grail of Irish historical documentation. The Rising is the most scrutinised period in Irish history, yet no blueprint or written plans for this seminal event has ever been found.  This is understandable when one considers the extreme secrecy with which the leaders planned the Rising.  Markievicz’s sketchings based on Robert Emmet’s rebellion and her notes on it and the lessons to be learned from it confirm to historians that the Rising leaders did study that episode from 1803 for guidance. Some 113 years separated the 1803 and 1916 rebellions, but many of the streets and barracks were the same.

‘Emmet’s plan’: “In my opinion I would say that Emmet’s plan is the basic plan for the Rising, with amendments to suit the changing times,” said historian Darren Kelly, the joint author of When the Clock Struck in 1916: Close-Quarter Fighting in the Easter Rising.

“Interestingly, however, it is quite clear because of positions mentioned and areas to be occupied that Emmet’s plans were incorporated into the Easter Rising plans.  This would have been inevitable in any case, as so many of the enemy positions remained in the same locations.”

“Only so many options were available at the end of the day – think of the Schlieffen Plan in the first World War, it was broadly repeated with modifications in WW2 – there were only so many ways to skin that particular cat, and the same applied to Dublin.” Mr Kelly and his co-author Derek Molyneux say the Markievicz document is further proof the rebellion was far from an amateur affair.  “A great deal of consideration was put into their strategic and tactical positioning.

“Additionally, the simple fact that a woman was making military notes at the time is no less ground-breaking than the same woman being elected to Westminster in 1918 – the first woman in history to do so.” 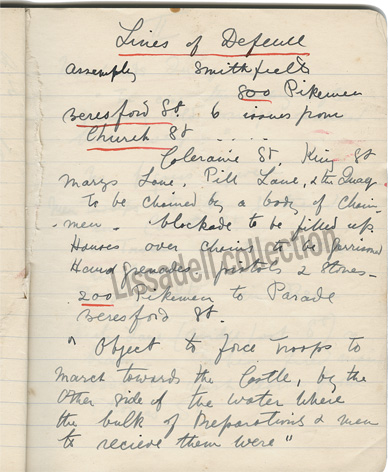 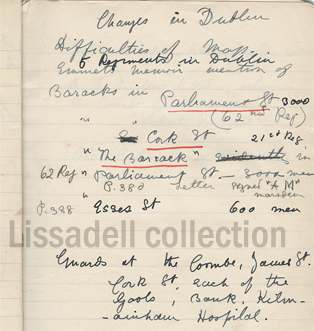 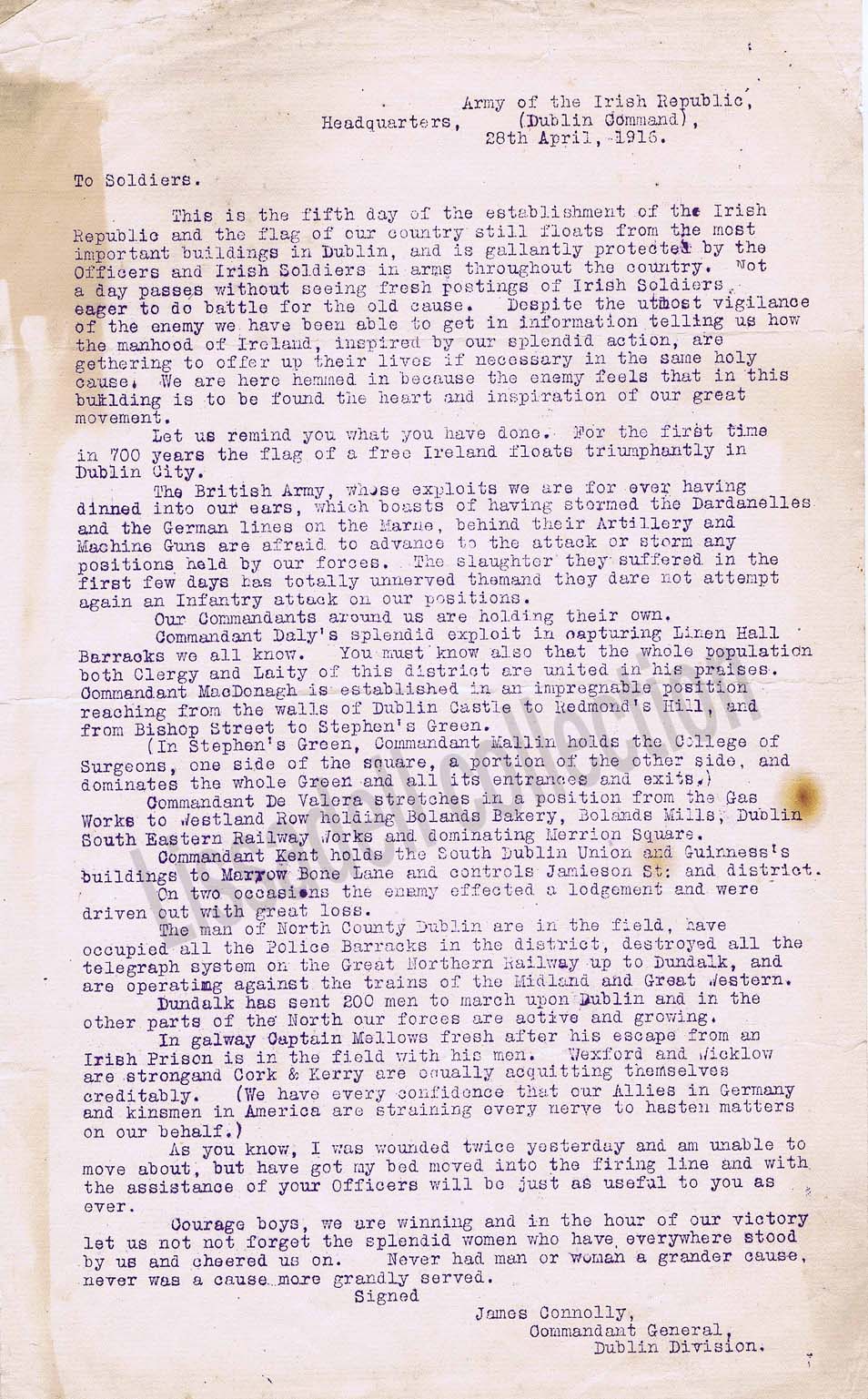 This is an original copy of a very rare document, the last public statement of James Connolly as Commandant of the Dublin forces. This, his last dispatch, was to the soldiers fighting for the Republic on  “the fifth day of the establishment of the Irish Republic and the flag of our country still floats from the most important buildings in Dublin”.  It was typed up by Winifred Carney.

To his comrades Connolly says: “Let us remind you what you have done. For the first time in 700 years the flag of a free Ireland floats triumphantly in Dublin City. …Cmt Daly’s splendid exploit in capturing Linen Hall Barracks we all know. Cmt. MacDonagh is established in an impregnable position reaching from the walls of Dublin Castle to Redmond’s Hill, and from Bishop Street to Stephen’s Green. Cmt. Mallin holds the College of Surgeons. Cmt. De Valera Bolands Mills. Cmt. Kent the South Dublin Union and Guinness’s buildings”.He reassures his comrades as to his injuries, and commends the women of the Rising: “As you know, I was wounded twice yesterday and am unable to move about, but have got my bed moved into the firing line and with the assistance of your Officers will be just as useful to you as ever.  .. Courage boys, and.. let us not forget the splendid women who have everywhere stood by us and cheered us on.  Never had man or woman a grander cause”.

Winifred Carney entered the GPO as a member of the Citizen Army, armed with a Webley revolver and her typewriter, and typed up the last dispatch of James Connolly. Historian Dr Margaret Ward notes that Winifred was well organised, with dispatch pads at the ready; she also typed up material for Padraig Pearse. Winifred’s calmness was admired – “calmly click-clacking away, as though accustomed to working in this martial atmosphere all her life” – Joseph Plunkett noted in his field pocket book. Historian Charles Townshend wrote of Winifred that “her deadliest weapon was her typewriter” – although as Dr. Margaret Ward notes, she won a prize for shooting in Cumann na mBan target practice. Catherine Rooney recollected that her “desk [was] in the main hall of the GPO, towards the Henry Street side”. Winifred was the daughter of Sarah Cassidy of Bangor. 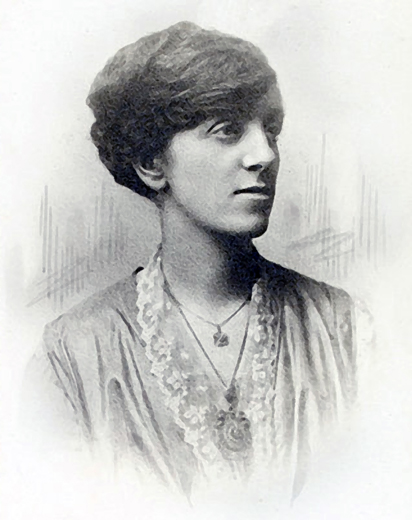 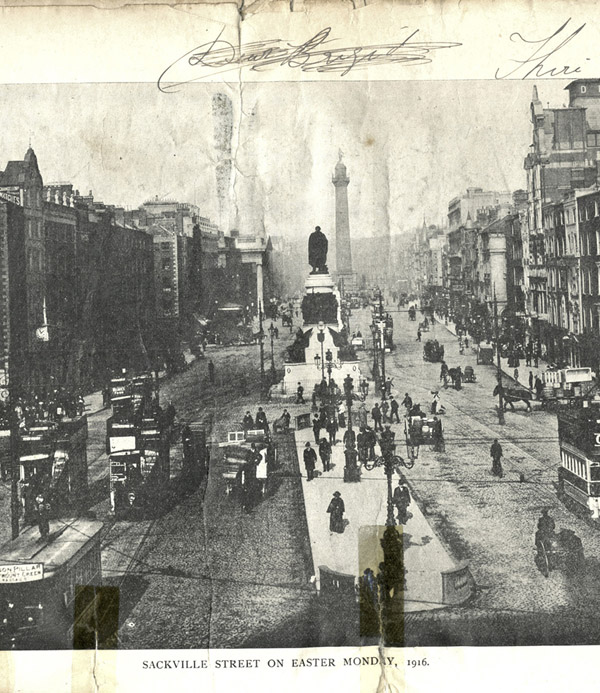 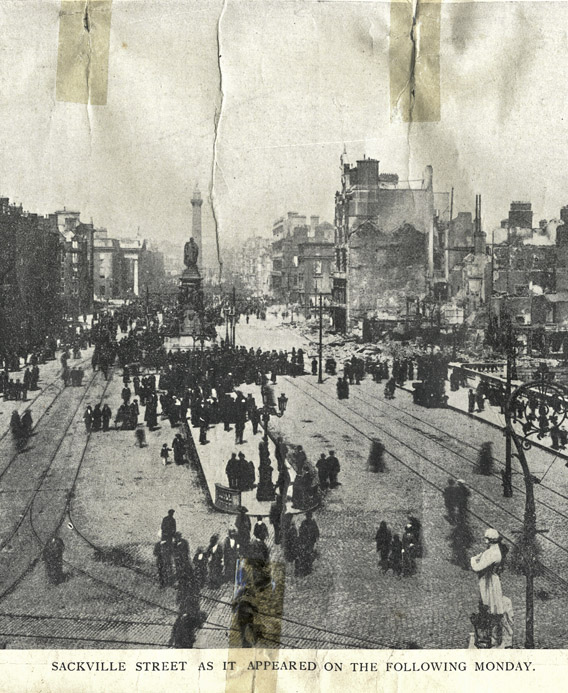 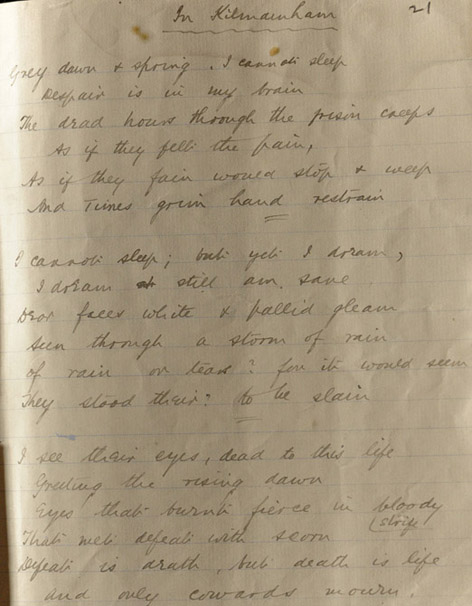 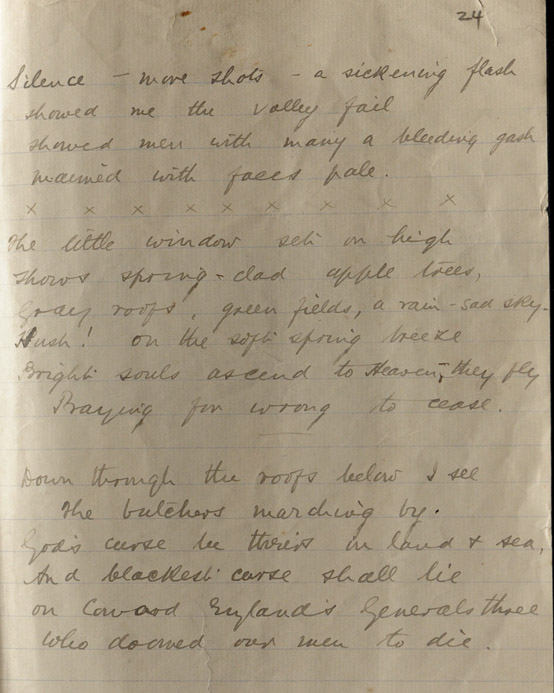 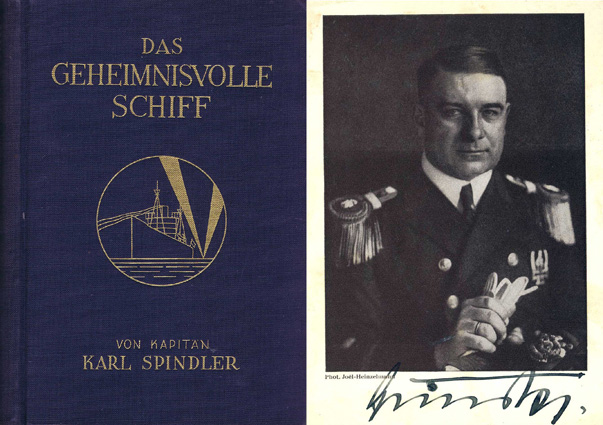 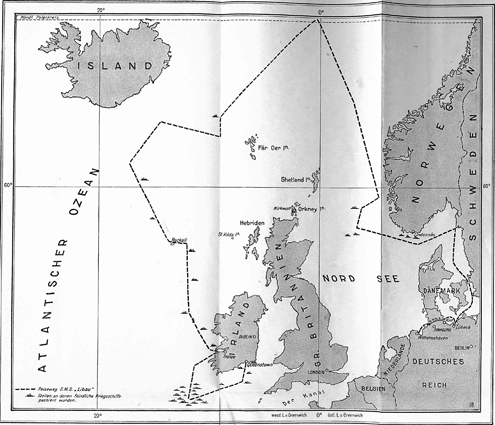 Captain Karl Spindler of the German Navy.  His ship the Aud accompanied Roger Casement to Banna Strand, April 1916. Roger Casement had sailed in the U19 submarine under Captain Raimund Weissbach and was set ashore on Banna Strand on 21 April 1916. Captain Spindler’s chart shows the course of the AUD (formerly the ‘Libau’) from Wilhelmshaven, through the Kiel canal, the Baltic Sea, the North Sea, past Rockall, down to Kerry Head, and round to Cobh where he scuttled her, to prevent the capture of weapons destined for the Rising (20,000 rifles, 1,000,000 rounds of ammunition, 10 machine guns, and explosives).  He sketched Kerry Head, and his encounter with British naval officials. Having served time as a prisoner of war in Britain, Spindler emigrated to the US (Bismarck, North Dakota) where he spent the remainder of his life. Spindler’s account of the events of April 1916 is reproduced below.

The 1916 Gallery ceiling artwork is by Lissadell artist-in-residence Gareth Boyle.  Originally from Belfast, Gareth now lives in County Leitrim. He creates portraits and landscapes, and his work has been praised as  ‘very much natural nature’, ‘almost photographic’ and ‘exquisite’. Gareth Boyle is also a qualified archaeologist and has participated in a number of excavations and archaeological projects throughout Ireland. Contact Gareth at: mail@garethboyleart.com.      Below Casement arrested on Banna Strand.     Right the sinking of SS Aud 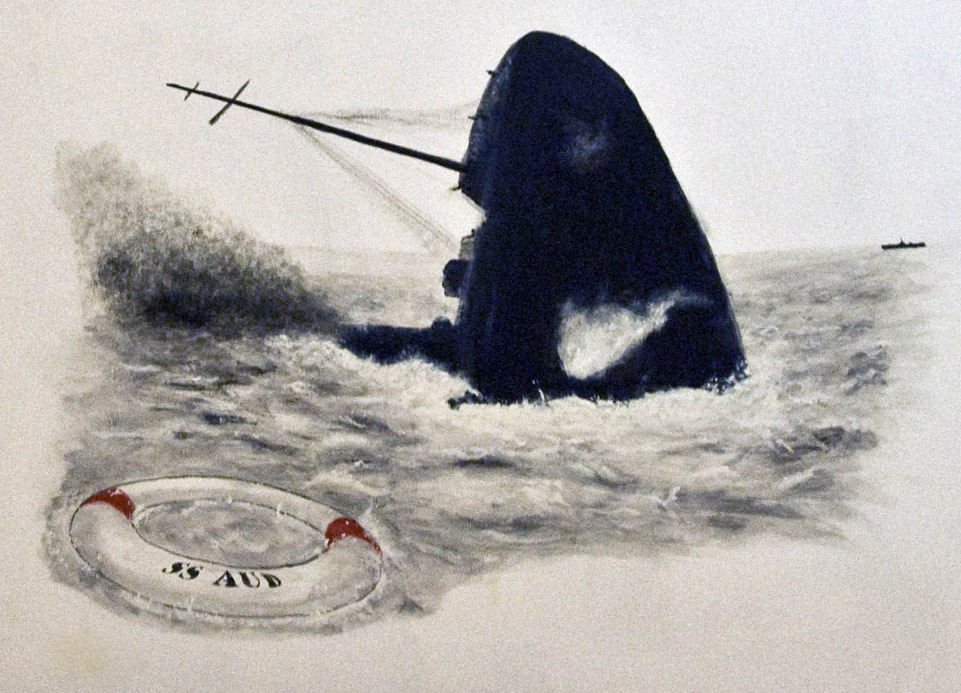 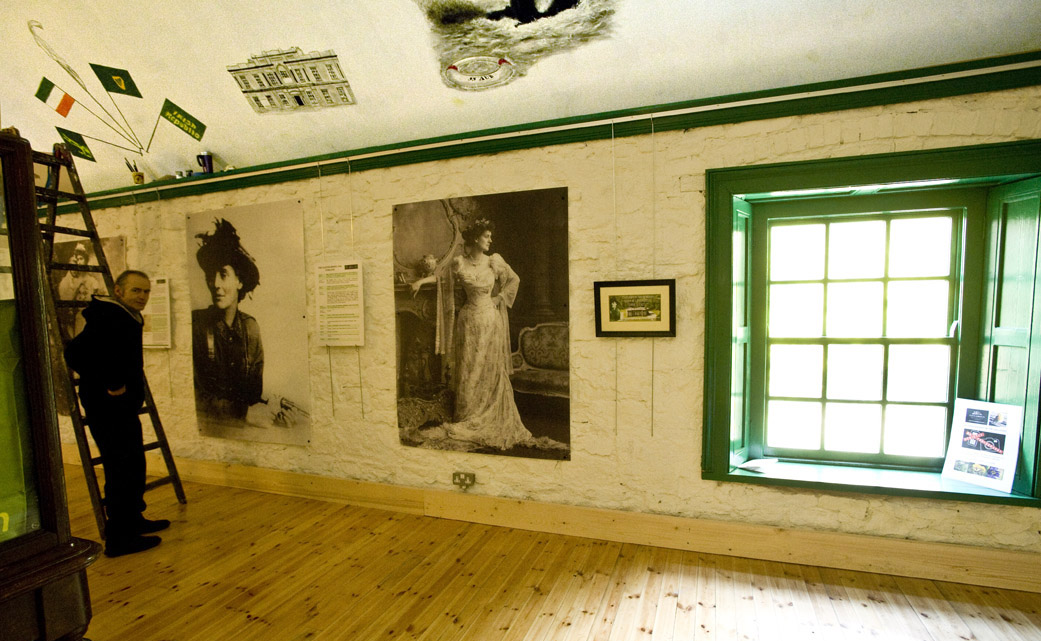 Gareth Boyle at work in the 1916 Gallery at Lissadell. 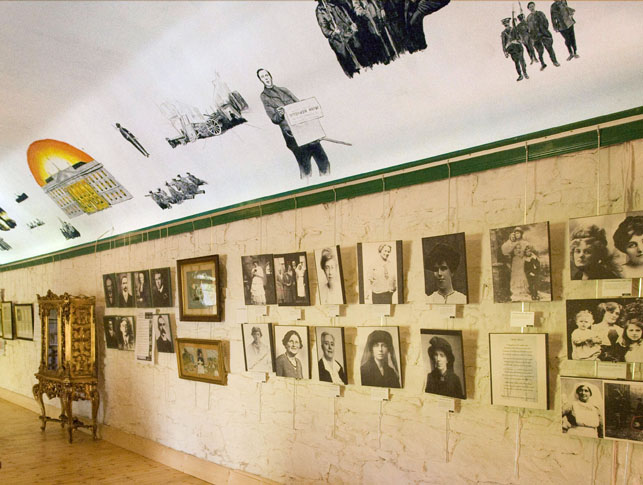