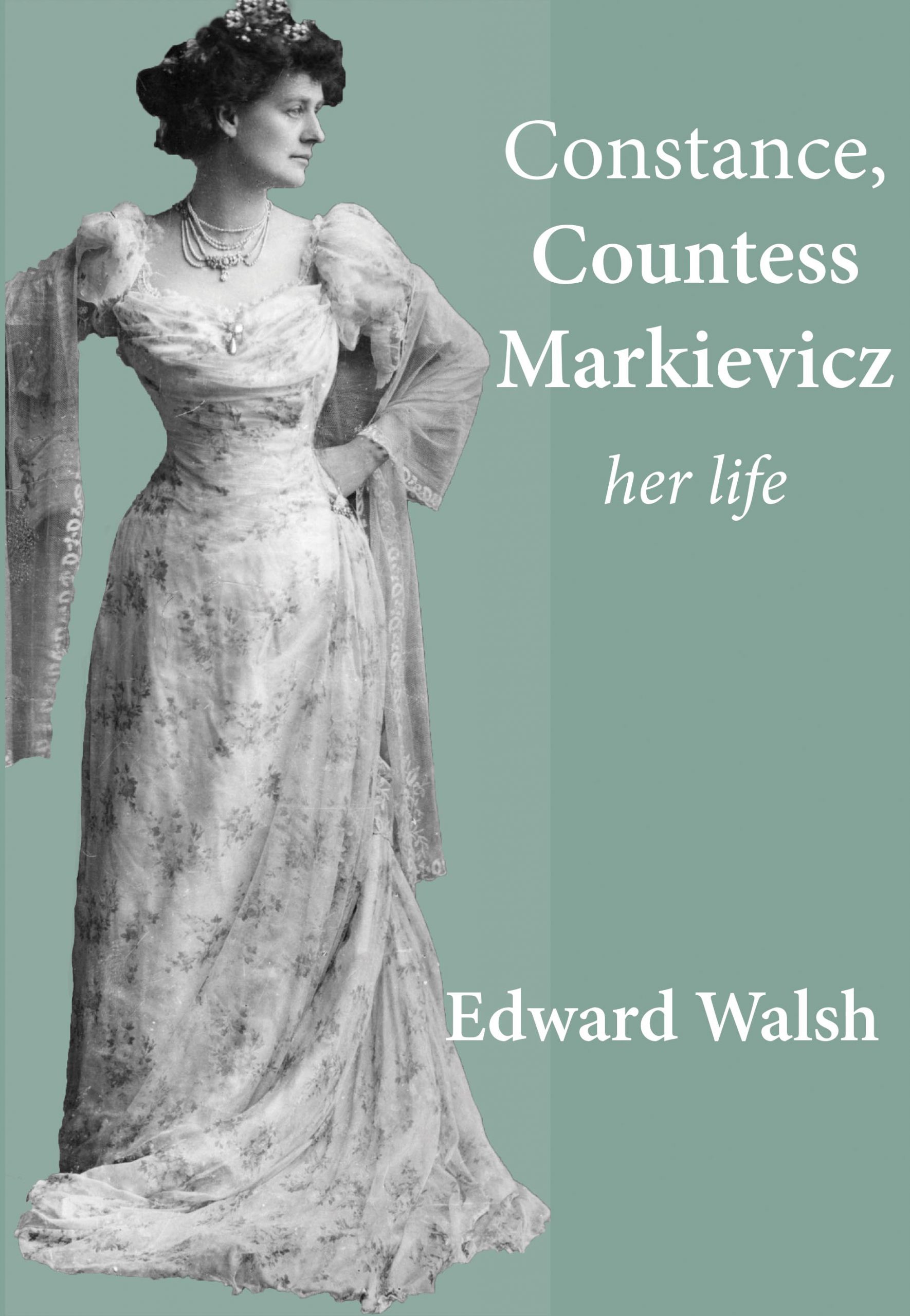 Constance Markievicz, born Constance Georgine Gore-Booth, was a remarkable woman. Born into wealth and privilege in Lissadell, she is most famous for her leadership role in the Easter Rising of 1916, and subsequent revolutionary struggle for freedom in Ireland, for which she risked her life.   As a girl, she confided to her diary that:   “women are made to adore and sacrifice themselves, and I as a woman demand as a right that Nature should provide me with something to live for, something to die for”.

An artist, a poet, a revolutionary, a suffragist and a tireless worker for the poor, Countess Markievicz was the first woman member of Dáil Éireann, the first woman Minister in a modern Western democracy (having been appointed Minister for Labour in the First Dáil of 1919 – 1921), and the first woman elected to the Westminster Parliament in London (where she declined to take her seat, believing that Ireland should be governed by the Irish). Countess Markievicz was sentenced to death for her part in the Rising, commuted to life imprisonment because of her sex.  On her release in 1917, following a general amnesty, she served a further four terms of imprisonment, one in Holloway Prison in London, from where she was elected to Westminster Parliament in 1918.

The story of Constance, Countess Markievicz, is a story of a woman of determination, independence, idealism and self-sacrifice in pursuit of freedom for the Irish people. It is the story of a woman who has inspired generations of Irish men and Irish women, and who continues to inspire. 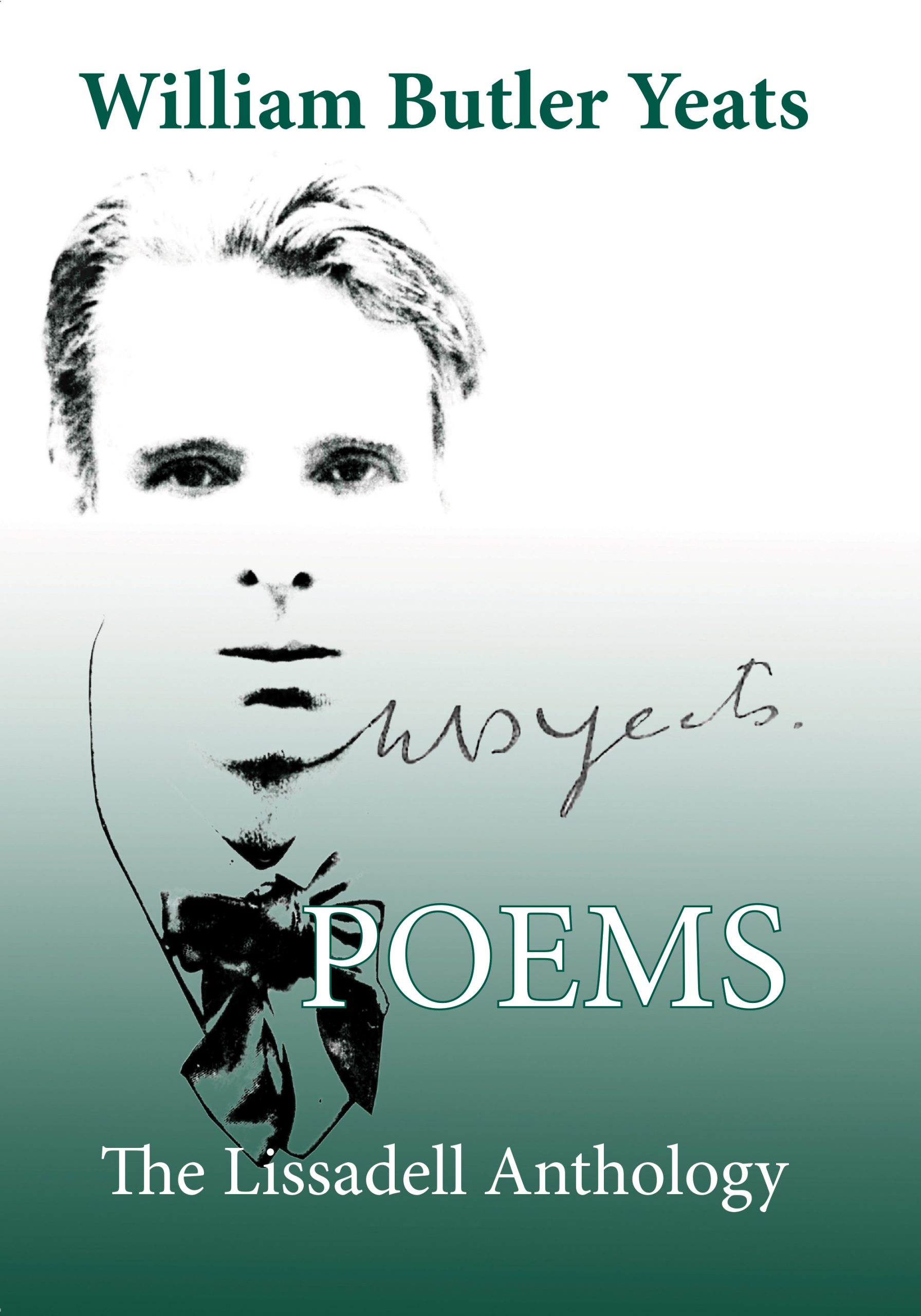 William Butler Yeats is unquestionably Ireland’s foremost poet.  As a young man he spent many happy years with relatives in Sligo, and became friendly with the Gore-Booth family, including Countess Markievicz and more particularly her sister, Eva Gore-Booth.

Yeats wrote four poems about, or referencing, the sisters and their home at Lissadell:  ‘In Memory of Eva Gore-Booth and Con Markiewicz’,  ‘On a Political Prisoner’, ‘Easter 1916’, and  ‘The Man Who Dreamed of Faeryland’.

Yeats’ poetry is ‘universally and inexhaustibly relevant’, said Nobel prize winning poet, Seamus Heaney in 1995.  His poetry ‘has become a part of the culture’s water supply; his poem “The Second Coming” may well be the most thoroughly pillaged piece of literature in English’, said Nick Tabor, journalist, in 2015.

Written in 1919, ‘The Second Coming’ warns that two thousand years of Christian values and moral certainties will be replaced by the complete antitheses, the pitiless rough beast of anarchy:

Things fall apart; the centre cannot hold;
Mere anarchy is loosed upon the world,
The blood-dimmed tide is loosed, and everywhere
The ceremony of innocence is drowned;
The best lack all conviction, while the worst
Are full of passionate intensity.
This book is €18 to buy from The Lissadell Press. 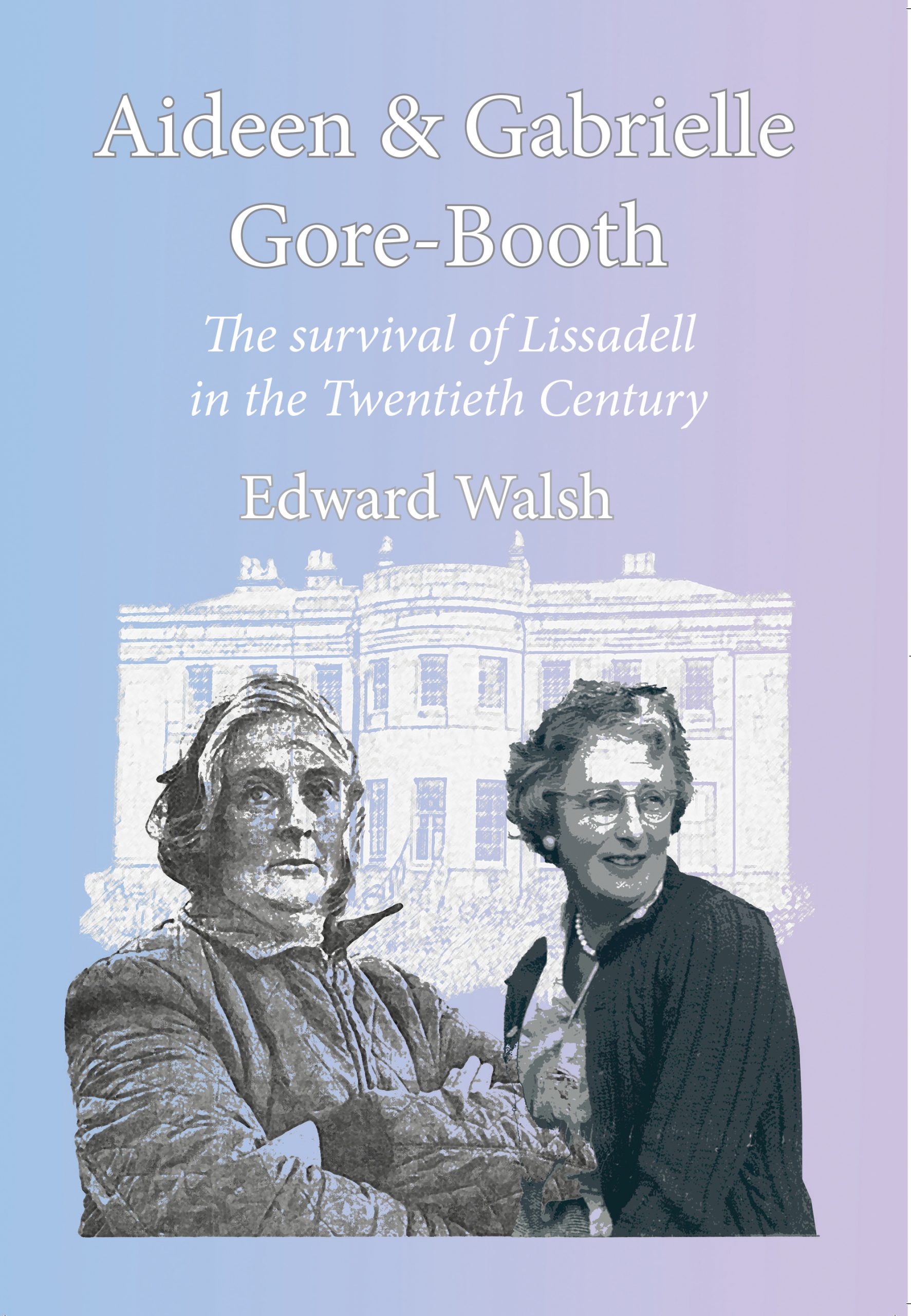 Lissadell: a story of survival in the Twentieth Century:  this is the story of the determination of two sisters, Gabrielle and Aideen Gore-Booth, to preserve Lissadell and their father’s legacy from destruction.  Gabrielle was a hardworking horticulturist who assumed the governance of the 3,000 acre Lissadell Estate in 1944, on the death of her father, Josslyn.  Her eldest brother Michael (the heir) was judged mentally incapable and made a Ward of Court. The second youngest of a family of eight, she was just 26.

The story of how Gabrielle and her sister Aideen were reduced to near poverty and eviction by the almost dissolution of the estate during the Wardship is known as “The Lissadell Affair“, and it generated considerable indignation when first made public.  It is a tale of mutual incomprehension, distrust and increasing frustration with the legal process. Yet the sisters survived with dignity, and a touching innocence.  They are remembered with affection by their neighbours, and by the many visitors to Lissadell, who come to see the childhood home of their aunts, Constance, Countess Markievicz, and Eva Gore-Booth, and to walk in the footsteps of Ireland’s great poet, William Butler Yeats. 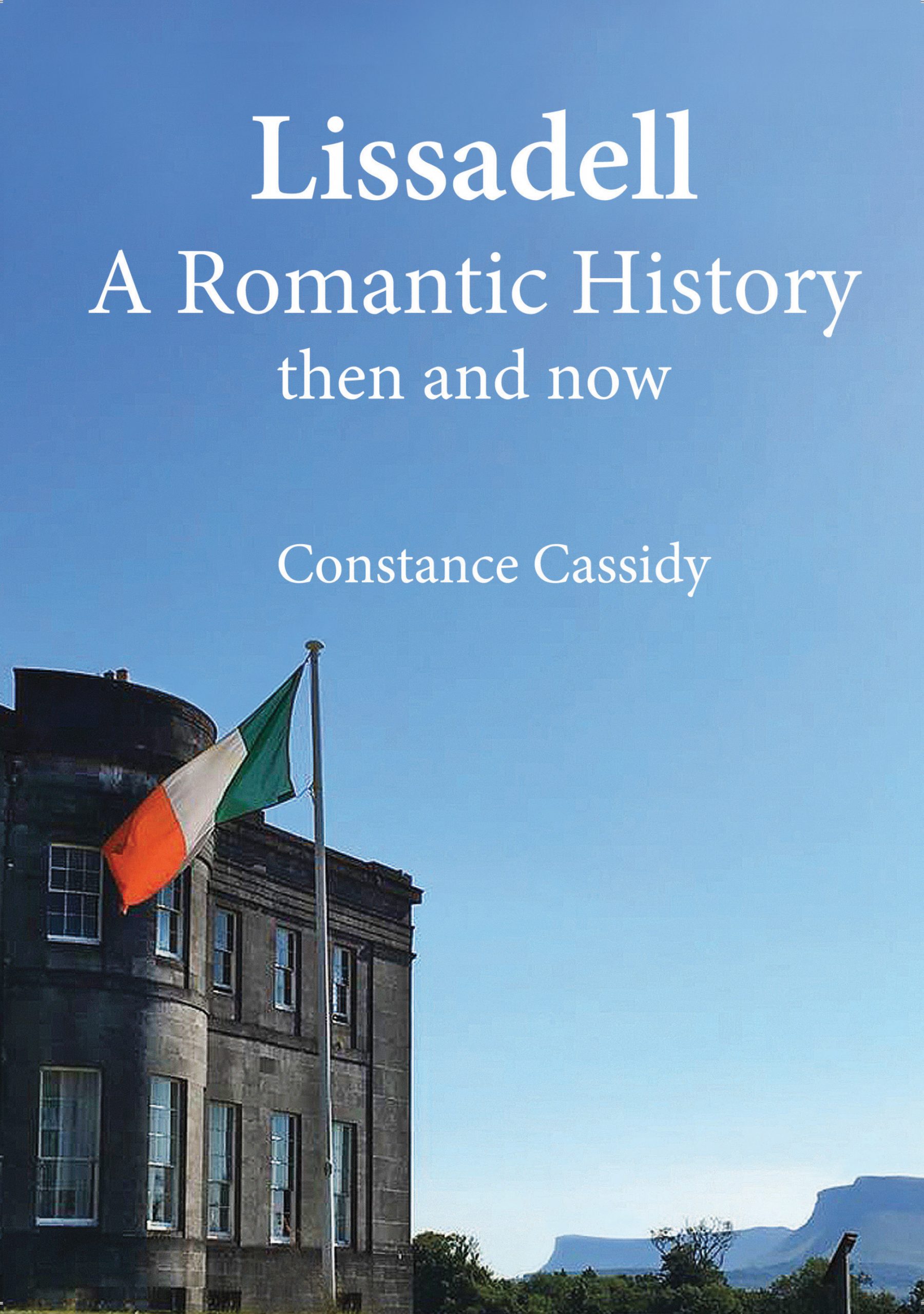 This is a guide to the Lissadell Estate, past and present. The Lissadell Estate is the home of husband + wife Edward Walsh, Constance Cassidy and our seven children. We welcome visitors, during the season, to the house and grounds. After 70 years of neglect an intensive programme of restoration – without any public funding – has taken place in the House, Gardens, Stable Block and grounds  and Lissadell is once again a place of beauty.

Lissadell is famous as the childhood home of Constance Markievicz, her sister Eva Gore-Booth and her brother Josslyn Gore-Booth. Constance was one of the leaders of the 1916 Rising, and was the first woman to be elected to Dáil Eireann, where she served as Minister for Labour (thus becoming the first woman minister in a modern Western European democracy), and was also the first woman to be elected to the House of Commons at Westminster, London (where she declined to take her seat). Eva was a poet of distinction and an active suffragist, clashing with the young Winston Churchill over barmaids’ rights in 1908. Josslyn created at Lissadell one of the premier horticultural estates in Europe. This horticultural enterprise has now been recreated at Lissadell. The great poet W. B. Yeats was friendly with the Gore Booth sisters and stayed at Lissadell in 1893 and 1894. He immortalised Lissadell and the Gore Booth sisters in his poetry. 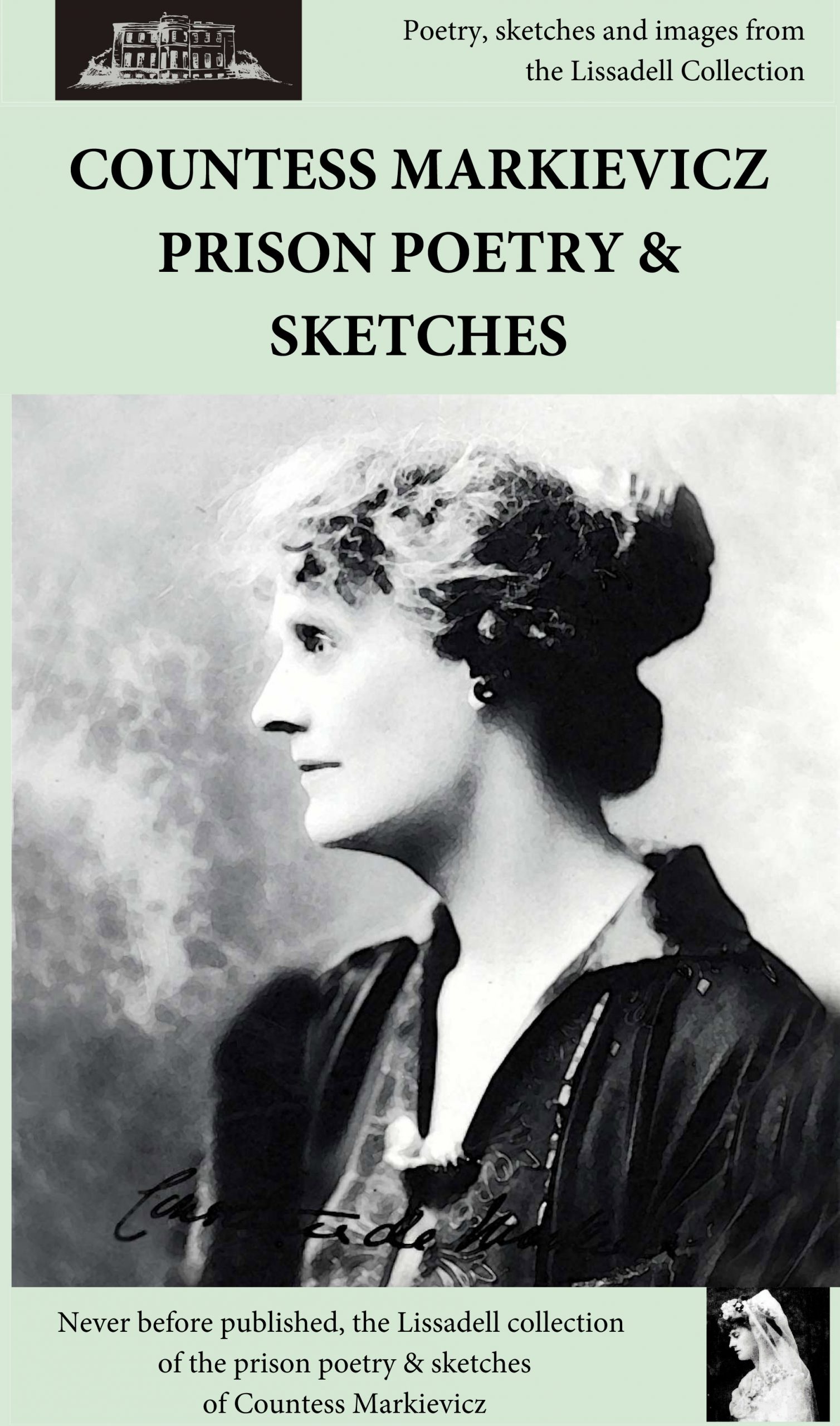 Imprisoned many times during the years of Rebellion and Civil War, 1916 to 1923, Countess Markievicz expressed her anger, despair, loneliness and hope in poetry and in drawings scribbled on scraps of paper smuggled out by Fr. Albert Bibby and others.

This is the first time this historic collection of her poems and sketches have been published.

1916,  May: Richmond Barracks, Kilmainham and Mountjoy in Dublin.

This book is €15 to buy from The Lissadell Press. 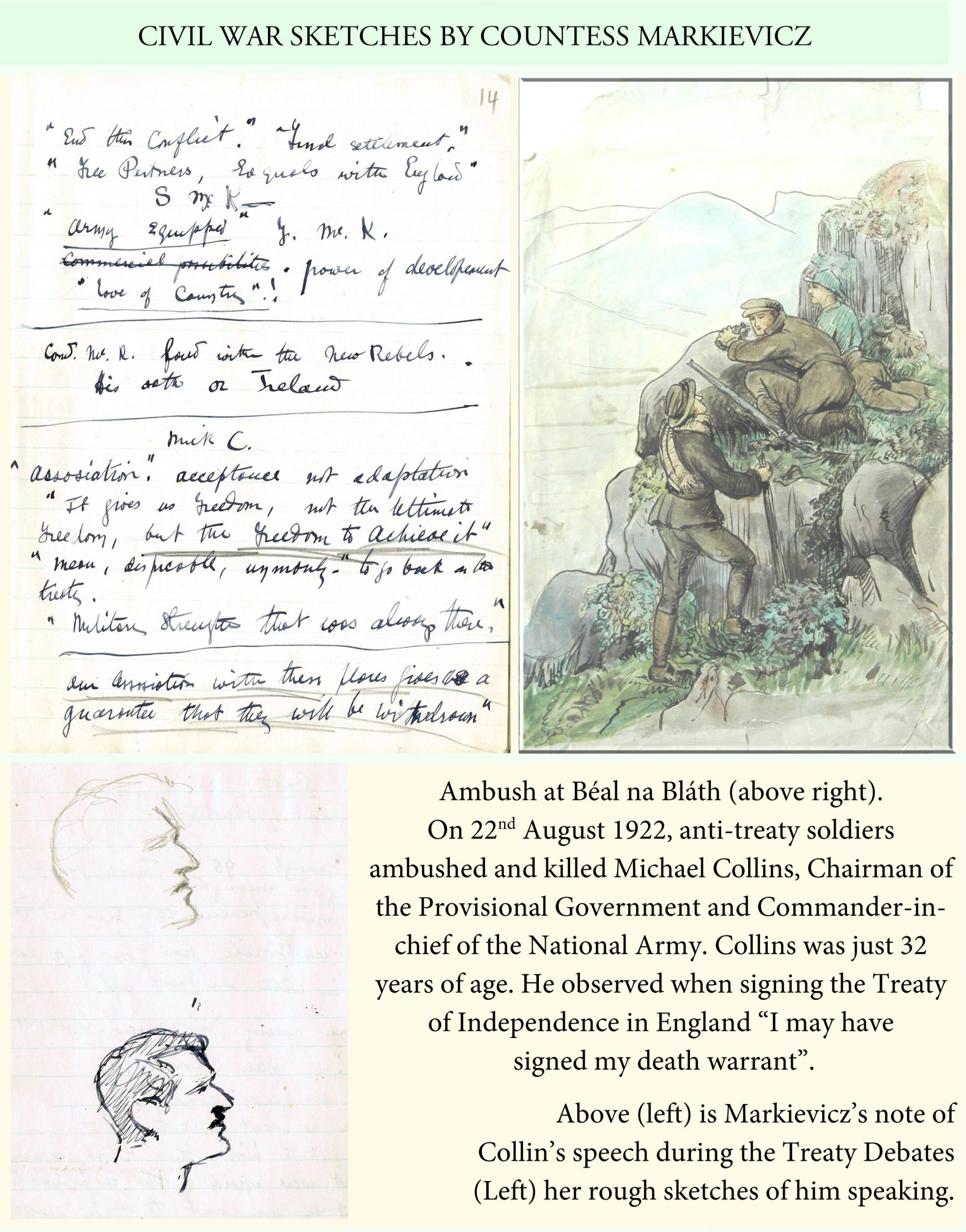 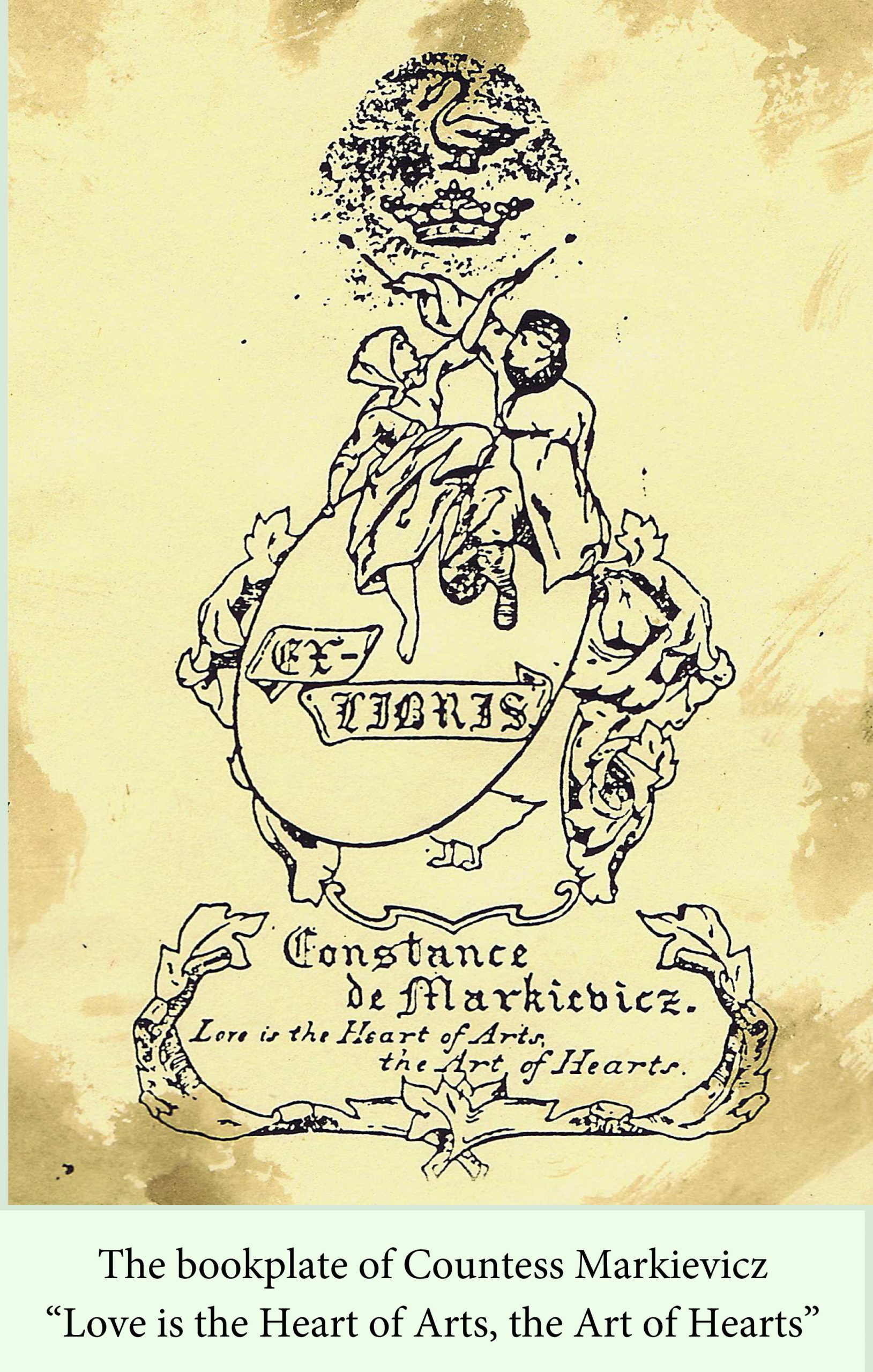 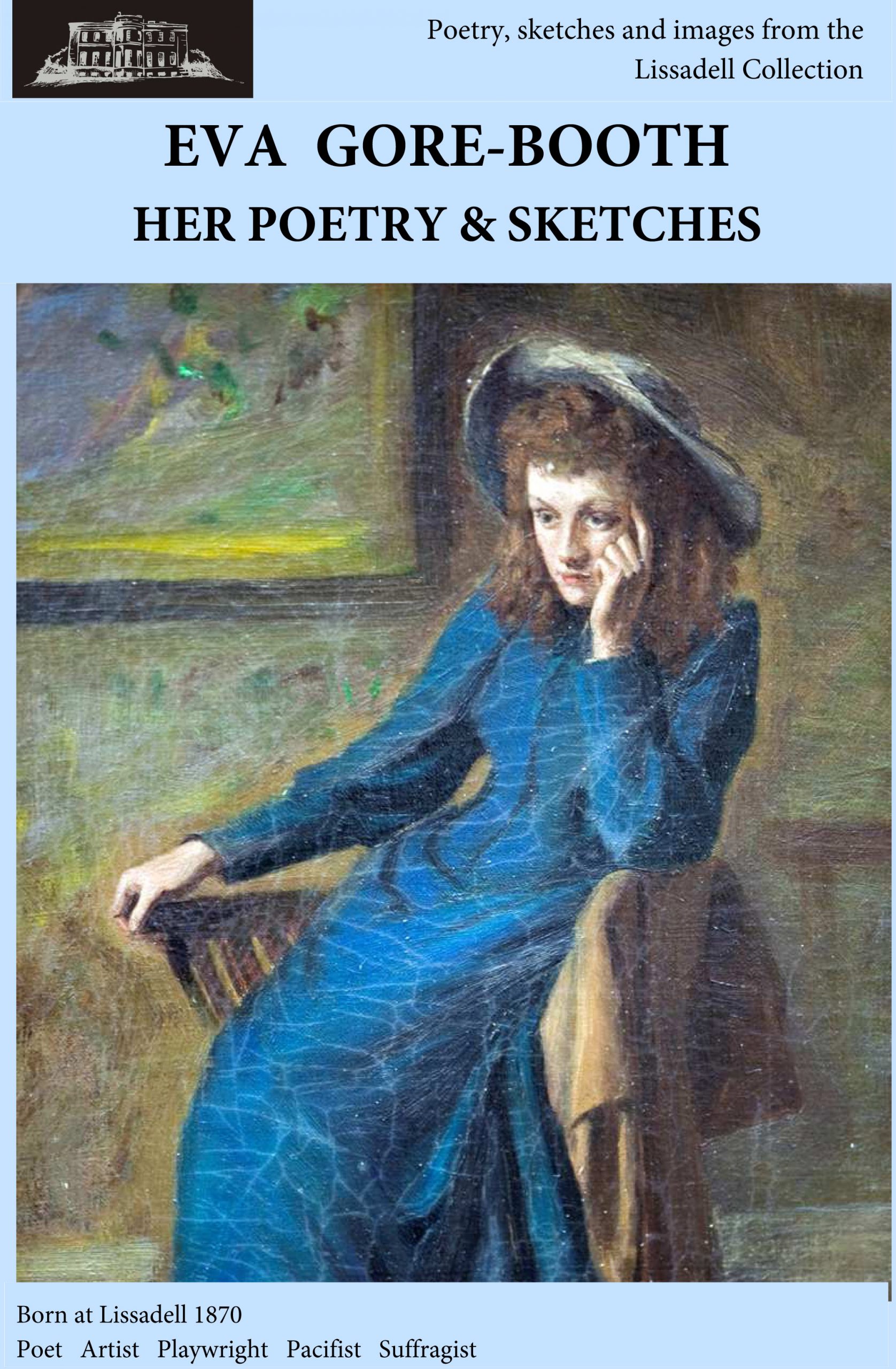 Born at Lissadell in 1870, Eva Selina Gore-Booth, suffragist, artist and poet, was steadfastly devoted to her elder sister Constance Markievicz all her life, although she spent many years in Manchester working to alleviate the condition of working women. Eva died some months before Constance, who was heartbroken. Eva made this promise to her sister:

“Your gift is for putting over-serious delicate emotion into fragile rhythms – avoid every touch of rhetoric, and every tendency to teach. Keep vefore you the idea of doing a little delicate book of lyrics that nobody will know whether to call romantic or religious – it would help with writing your own feeling for Irish scenery or Irish needs to give you a new and rich kind of symbol and metaphor”.

In 1916, when Yeats was 51 and Eva 46, he wrote:  “Your sister and yourself – two beautiful figures among the great trees of Lissadell, are among the dear memories of my youth”.

This book is €15 to buy from The Lissadell Press. 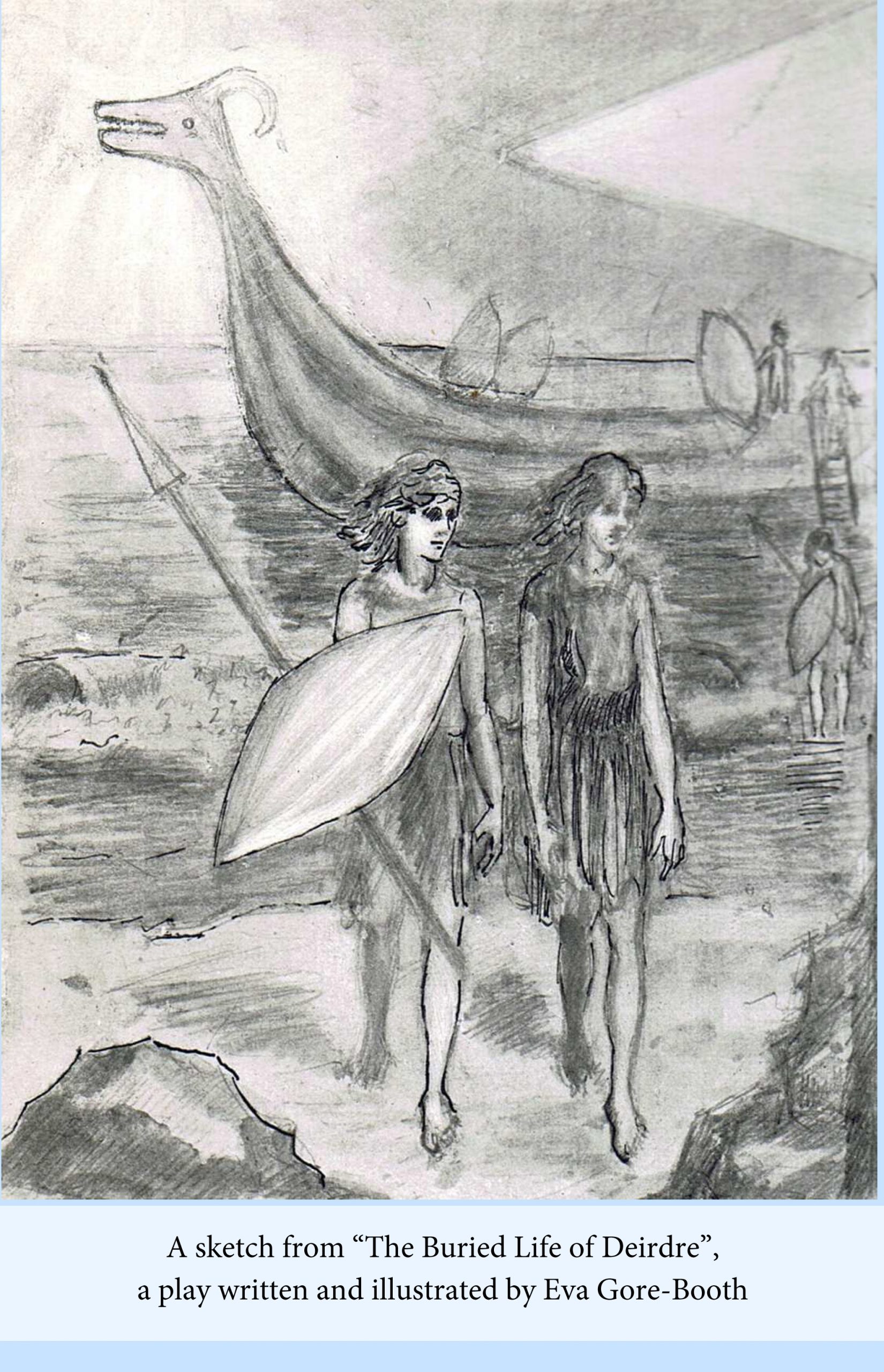 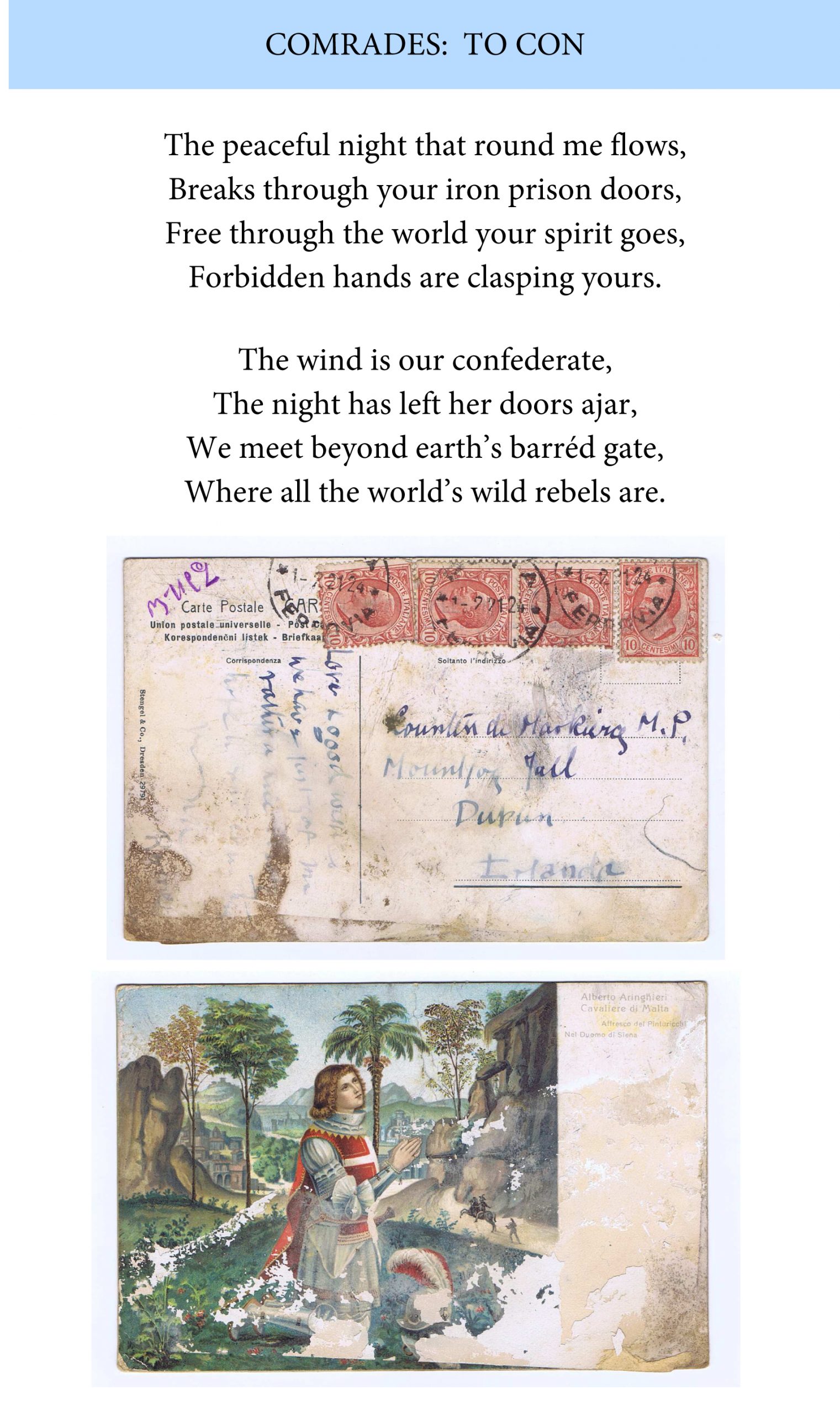