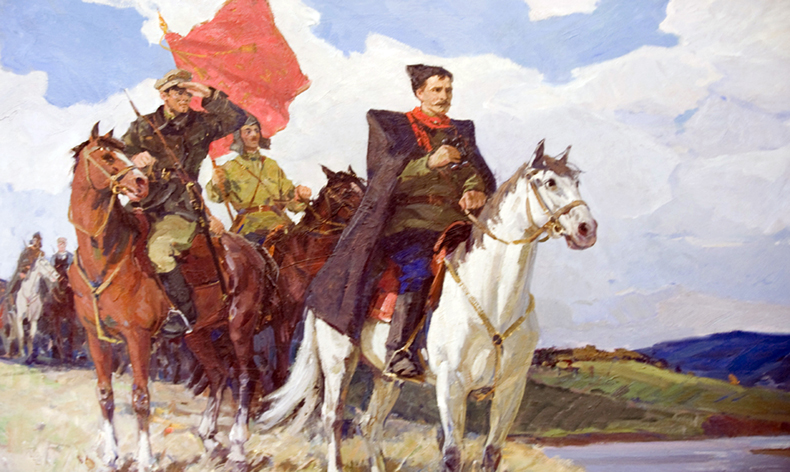 Konstantin A Shurupov was born in Kharkov in 1910, and died in 1985 in Kiev. He studied at the Kiev Art Institute between 1934 – 1939. Shurupov entered the Kharkov Artistic Institute, where such masters of painting as Sharanov and Sadilenko were teaching. Because of a rearrangement of artistic high schools, in 1934, Shurupov was moved into the Kiev Artistic Institute in the studio of the artist F. Krichevski. Following graduation in 1939, he was immediately called for service in the Red Army. From 1941-45, Shurupov served as a Sergeant-Major in Communications. For service to his country, he was conferred an order of the Great Patriotic War, a number of fighting medals and received an official message of thanks from Marshal Zhukov. Upon release from the Army, Shurupov began depicting the destroyed country. His period pieces gave him the opportunity to become a member of the Aritsts’ Union in 1945.

From 1945, he was a participant of the various artistic shows in the Ukraine, as well as in the Soviet Union. At the time of his death, he left a great number of works in collections of the artistic museums, including the Fleischer Museum.

Andrei Serbutovsky (1923-2006), a self-trained artist, was one of the most prominent Soviet painters of the second half of the twentieth century, and occupies a place of honour in Soviet domestic arts of this period, seeking to translate the moral aspirations of his era. As a young artist he worked under the banner of socialist realism, which was then in its heyday.  In his later work he sought to rethink life in the spirit of new artistic principles of post-modernism, but remained faithful to the traditions of realistic painting – “the inner truth of being”.

Serbutovsky successfully worked in different genres – portraits, still life, pictures, but most of all he drew landscape in a contemplative lyrical imagery. His paintings contain the beauty of everyday life, imbued with a sense of admiration of the world, expressing the diverse natural beauty of Poltava.  Serbutovsky lived in difficult times, but this did not prevent him winning public recognition by the end of life, and he was awarded the title of Honored Artist of Ukraine. But the main thing – his art has stood the test of the authenticity of the time. Over the years, the work of Andrei Andreyevich Serbutovskogo is on a par with the most important creators of contemporary art.

Additional data on Shurupov and  Serbutovsky kindly provided by Andrey Nikeryasov of the Russian Embassy in Dublin.